After our  visit to Wakefield we set off back towards Stainforth. As we left I noticed that the cooling water was not flowing as strongly as usual. By the time we got back to Stanley Ferry it had stopped altogether, so we moored up again to investigate. The inlet filter was clean, so I took the pump apart only to find that the impeller had totally disintegrated. It was due for replacing, but I suspect its end was hastened after we had run aground and sucked in large amounts of sand in trying to get off. I had to completely remove the pump and adjoining pipework to make  sure I had extracted all the pieces of the impeller. I fitted the spare, then reassembled everything and was reassured to see the healthy flow restored. By this stage it was getting quite late, so we decided to spend the night at Stanley Ferry and make a fresh start in the morning.

We set off early and, having given the sand bar at Fairies Hill a wide berth, were soon back at the Castleford Junction. We were doing well until we managed to lose the wind vane in a lock. Sally was on the lock side and I went below while we were emptying the lock. Despite Sally’s efforts while I was below Daybreak drifted back into the lock gate with enough force to snap the rod holding the wind vane, which then dropped into the lock. We motored out and moored up to a lighter just below the lock, then went back with the sea searcher magnet,  to see if we could retrieve it.  Much to my surprise ,after about 20 minutes of dredging up bits of rusty old iron we felt something larger and as we hauled up the sea searcher, the wind vane emerged from depths of the lock. 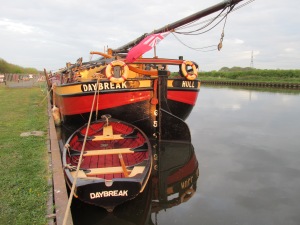 As it was getting late by this time,  we went only a little further and moored up for the night. The next day we went back down the New Junction Canal and through Bramwith Lock.  The weather was very changeable and so we decided to moor up for lunch. While we were eating  a strong squall blew through and we were congratulating ourselves on being comfortable below rather than out on deck. However when we came out after lunch, the whole ship was covered in the dead flower heads from a tree on the bank. It took us nearly an hour to clear them off before we could continue to Stainforth.